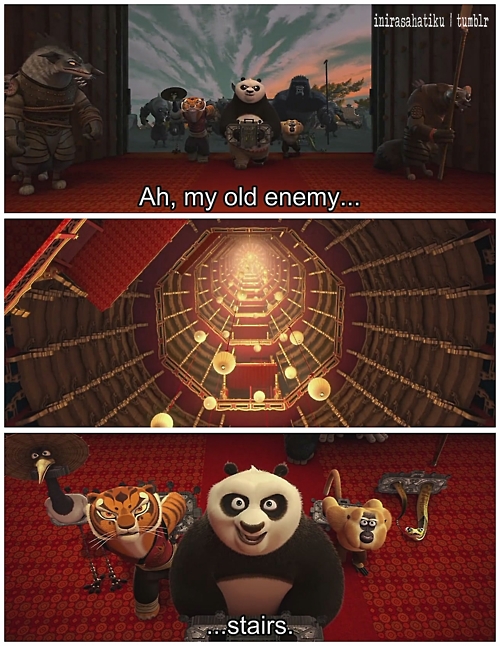 Having established himself in the first Kung Fu Panda film as more than just a cuddly bear, Po and the Furious Five find themselves up against something which threatens the Valley of Peace – an evil peacock, Lord Shen, and his canons which destroy everything that stands in their way – even kung fu. At the same time, Po comes to realise that his dad, a goose, is not his biological father, asking questions about where he originated from. It probably won’t surprise you to know that the former and the latter are very closely cause-and-effect interlinked as Po struggles with inner demons as well as physical ones, but the journey, in which Po and his ensemble of wisecracking fighters – headed by the badass Tigress – makes for one of the most entertaining Summer films of this year, as well as a film so emotionally layered that I was moved to tears at more than one point.

For the most part, the voice actors do their voiceovers without entering the relms of excellence such as Eddie Murphy in Shrek, or Ellen DeGeneres in Finding Nemo, which is a massive shame to say the least, considering there are talented auteurs like Dustin Huffman, Dennis Haysbert and Seth Rogen on the books here, the latter who’s comic timing could have been put to much better use. There are, however, four exceptions to this rule in Kung Fu Panda, only one of them bad. The bad is Angelina Jolie. As the hardcore Tigress with a taciturn demeanour and fists of steel (quite literally), she is drawn to exude an air of unapproachability, but deep down with a heart of gold. It’s quite a difficult kind of character to portray in animated film, but Jolie never veers out of the monotonous in her voicework, and it is safe to say she makes a tiger’s dinner out of her “performance.” The other three exceptions, however, are all good ones. Gary Oldman is absolutely fantastic as the evil peacock, springing menace in every line he delivers, and Chinese actor James Hong, so often typecast as a Chinese takeaway guy or waiter, voices Po’s adoptive father Mr Ping, who is, surprise surprise, a restaurant owner. But that unmistakable Asian voice of his, so hilarious in it’s over the topness, is also called on to deliver some things other than jokes in Kung Fu Panda 2, and one scene in particular, in which he tells Po about how he found him (in a vegetable crate, Po had eaten all the radishes) is an emotive tour-de-force in heartfelt voice acting.

But, as with the prequel, the film belongs to Jack Black, and whilst the film could have done just as well with any other actors voicing the Furious Five, it most certainly would not have been anywhere near as special without Black. Whilst I could name a smattering of his previous film roles which perhaps haven’t truly tested him as a serious actor- and indeed, there are those who would add Kung Fu Panda 2 to this growing list – he is a revelation here, funny in the comedic scenes, loveably goofy throughout but just as good at the melodrama.

Indeed, the theme of adoption might unsettle a few parents watching Kung Fu Panda with their kids, as they were expecting something a little lighter from a Summer blockbuster. And, to its credit, Kung Fu Panda is one of the few films I’d have paid to watch in the cinema – the fight scenes are breatakingly detailed and so well-choreographed that you forget that you’re watching cartoon animals fight. The score, with its Chinese instruments and motifs, sounds beautiful. But the over-arching quality that elevates Kung Fu Panda 2 above that of run-of-the-mill well-made but forgettable animated films is the story, and that of Po’s personal voyage of self-discovery. I particularly liked how Po’s flashback scenes were drawn with a different king of animated detail used in the rest of the film; something about that really struck emotional chords with me. And Po as a baby panda is absolutely adorable, sweeter than toffee. KFP2 is very very funny, but more importantly, it has a huge amount of heart. There is a lot of thematic material in Kung Fu Panda 2 and those who choose to judge it by its cover and give it a miss are really missing out; as Dolly Parton might say, “I’m a real good book”.

When I read Kung Fu at the beginning I was a little put off but gradually warmed to this movie, looks like a good movie to watch over Xmas.