A remake of Anne Fontaine’s 2003 film Nathalie…, Chloe is a film about obsession, sex, and the tangled web that lies weave. Julianne Moore is a successful gynaecologist, who’s accomplishments in her job sadly do not translate to that in her married life. Her son’s a semi-manic depressive teenager who shuts her out and her husband (played by Liam Neeson), misses his own surprise birthday party, under suspicious circumstances.

Her mistrust is further fuelled when she spies a picture message on his iPhone (there’s your product placement). Deciding to take matters into her own hands, she enlists upscale hooker Amanda Seyfried to initially talk to him, see what happens, but soon their encounters become more-than-just-talking as relations between the three become increasingly convoluted and messy. 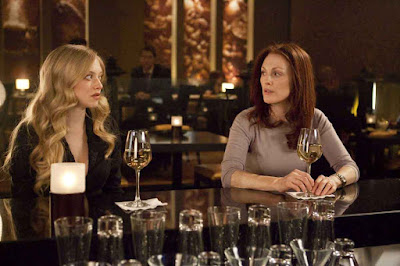 Julianne Moore is one of my favourite actresses, and her performance in Chloe is the epitome of nuance and quiet heartbreak. The writing in the film is less than stellar, and she is the glue that cements the entire film together.

Amanda Seyfried, with her huge doll eyes is nice to look at and everything, but her acting is a bit off here because one minute she’s sexy and smouldering, and next she exudes a childish air which does not gel at all with the character she’s playing. 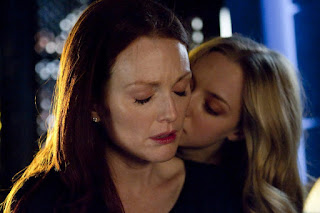 Liam Neeson is good as the possibly philandering husband who simply gets sexier and more attractive to women with age, and the relationship between him and Moore is portrayed well. The relationship between Seyfried and Moore (which enters sapphic territory), not so much. The two women have no chemistry whatsoever and whilst men watching wouldn’t really mind, I just found myself embarrassed for both women in their cringey “sex” scene.

This claustrophobic three-hander boils and bubbles up nicely to its ultimately shattering denouement, and there are a fair few thrills along the way.  Perhaps because I'd seen the original, I knew what was coming, and thus the "twist" didn't surprise me at all, though to be fair, I think most of the uninitiated will see it a mile coming too.

For all the talent involved (Egoyan himself has covered sexual obsession so much better), I couldn’t help feeling a little disappointed.

Very good acting, believable characters as well as an interesting development in the story. I really enjoyed this movie.