My 11-year-old brother Tom has a lol of a MSN profile, wherein he lists his favourite films as the likes of The Pink Panther II and Fantastic Mr Fox. However, a film choice he has there that I actually approve of is Up, the animation of 2009 that until today, I’d not actually seen. But you know what they say, good things come to those who wait. I’d waited long enough for Up, and it sure as hell was good enough.

As a child, Carl Fredrickson was in awe of the lost word depicted in Paradise Falls, with all its undiscovered breeds of animals and plants. In his head he painted pictures of going there, going above (or around) Mount Everest and the likes in order to get there. One day, in his play adventures, he encounters bright and bubbly Ellie, a girl who seems just as interested in the destination as he. Together, they form plans of travelling to Paradise Falls. Even though this was a childhood dream, it carries on through their adult life and through their marriage.

However, due a range of factors, (funds needing to be spent on burst tires, ailing health, etc), their plans are never realised. Eventually, Ellie dies and, in memory of her, Carl stays in their home despite pressure from nearby construction agencies to buy him out. He talks to his home, calling it Ellie, for it is his only link to his beloved wife. When he has a violent outburst and attacks somebody, the court decides it’s time to take Mohammed to the Mountain and take the house away from him.

However, on his last night, Carl decides he won’t go without a fight and, in a trick he learnt from selling balloons, he attaches thousands of balloons through the chimney of his home, taking him upwards. One thing he hadn’t fathomed, however, was that budding Scout Russell was still on his premises, and hence, he went up with him, thus beginning their adventure together.

Pixar do creative like no other animation studios, and they’ve really outdone themselves here. The whole idea of a flying house is wonderfully exhilarating, yet the usage of balloons to do so is very old school. This fusion of new and old is reflected in the film’s two protagonists, cranky old Carl and bright-eyed and bushy-tailed young Russell. There’s humour aplenty too, I laughed a lot at the “Cone of shame” bestowed upon Doug and the dogs who can talk are as entertaining as they are impeccably-trained. Like in WALL-E, there’s a quest; initially, to guide the house to Paradise Falls, but then to save rare bird “Kevin” from the greedy hands of a Lindbergh-type explorer that resides there, Charles Muntz. It’s what the bbfc might call “mild peril”, but however supposedly mild it is, it’s still dead, dead exciting.

Michael Giacchino, who scored The Incredibles, provides another genius score for Pixar. It accompanies the movie in is sweet and sour entirety. In isolation, I’d found it difficult to love the score, but, accompanying the film, the images and music went very well. The visuals and landscapes were wonderfully defined and every frame had countless levels of detail. This is characterized in the dogs – each dog is programmed to carry out instructions, yet every dog is a little bit different. The script is sensitive and smart, taking in the standard scope of messages that Disney enjoys churning out such as following ones dreams and the depths to which obsession can drive you.

There’s a witty in-reference to greedy producer Charles Mintz (he stole one of Walt Disney’s characters and dubbed it his own) in the explorer Muntz, who is voiced with appropriate menace by Chrisopher Plummer (still haven’t forgiven him for The Imaginarium of Doctor Parnassus though). Growing old and feeling like nothing has been achieved is a theme that everybody can relate to, and this is epitomized in Carl.

However, in a latter scene when he revisits his wife’s “Adventure Book”, he comes to see that sometimes, it is the relationships we have built and our memories that count more than any physical or academic achievements. There were the odd moments when the character of Russell grated (this was not helped by the slightly-too-eager voicework of the kid playing him), but this was generally balanced out with a truly moving sequence of images, or his own innocent-yet-profound musings, “It’s the boring stuff I remember the most”, as well as the nuanced, human, voicework of Ed Asner as the main character. 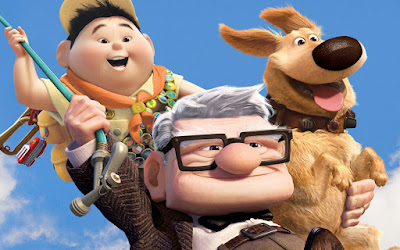 There hasn’t been a Pixar movie I haven’t cried a little bit at, and Up is no exception. This probably says more about my propensity to turn on the waterworks than anything else, but the wordless montage of Carl’s development from child to old man featuring Carl and Ellie’s romance and life together, shown at the start of the film meant I was crying much earlier than I do in any other film.

Like the Define Dancing sequence in WALL-E and the superhero montage in The Incredibles, this set the tone for the film. Unlike many scenes I’ve scene before though, it really took me by surprise; to be exposed to such poignancy so early on in the movie; the scene had real emotional resonance. It’s surprisingly dark stuff from Pixar, and, whilst most of it will go over young children’s heads, the part where Ellie is unable to conceive proved particularly upsetting for me. I had definitely not expected to be so emotionally invested in a film so early on, yet Pixar achieved it.

Pixar have told stories about monsters, bugs, toys, cars, fishes, superheroes and robots. One might have thought they were running out of scope. They might have even groaned when they discovered the main character was a 78-year-old man. But Up demonstrates that the key ingredient of a movie is heart. This film has plenty of that, and as a result, Pixar’s magic just keeps going Up.
Posted by Emma at 2/23/2010 12:18:00 pm

Whoaaa, now you make me wanna watch it ;)

The film is lovely, by all means check it out. :)

I really enjoyed this film, I wouldn't say it quite compared to Finding Nemo, or Monsters Inc, but it was still adorrrrable.

That four minute vignette was the shit.

Wow, thanks a lot for putting this up. I was wanting to hear this again, and dismayed to find out it's been expunged from the band's CD library. You saved me a long and fruitless search for my old cassette copy!
Mission Hills Real Estate

Nice movie. It was a good one like all the other Pixar's movie. I enjoyed this movie, there is a lot of humor but it has some special thing that makes this movie magical. As you have said that it contains heart that is the main thing.

Thanks that movie sounds great.

Great review for a fantastic movie, I could watch this over again.

In such a case, there is no solution to troubleshoot the defect of the appliance, other than replacing the tank. Dryer sheets only add to the problem, as they tend to leave an invisible film on the mesh filter of the lint trap, making it less effective at catching the lint. The initial step is to take away your damper and swap it with a top sealing damper.

buy tramadol tramadol hcl for - how to order tramadol cod

Very kind of you Feathers! Hope you stick around :))