RESTAURANT REVIEW: On the Bab (Shoreditch) 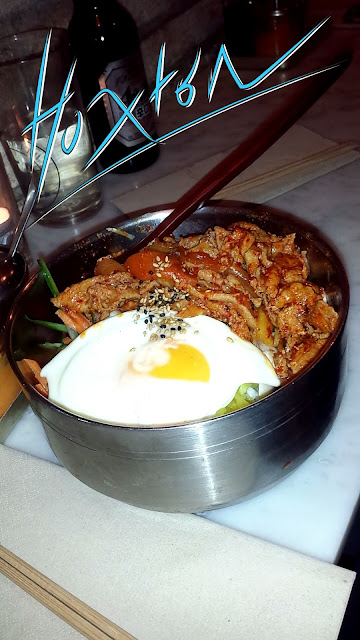 Readers of my blog will be all too aware that I don't have much time for restaurants who make their punters queue up. I just feel it brazenly declares that the restaurant cares more about making money than it does about the culinary experience of the people dining there. And The Table Cafe, one such restaurant which operated on the no-booking policy, proved to be a complete disappointment. Queuing up in the rain for this restaurant, I was struck with a sense of déjà vu and feared that, for the second time, I would have stood in the cold for ages, only to be served a below-par meal like a mug.

Fortunately, things didn't work out like that; I'm happy to say that On the Bab went some way towards restoring that balance in the Universe. Korean food is one of my favourite cuisines, and some of my favourite restaurants in London are delightful Korean places which offer fantastic value for money (there is a fantastic cluster of such restaurants around Tottenham Court Road, offering a much more palatable alternative to the over-baked American diners that are littered around the capital). On the Bab, which has chains in Shoreditch, Covent Garden and Marylebone, is another such place. 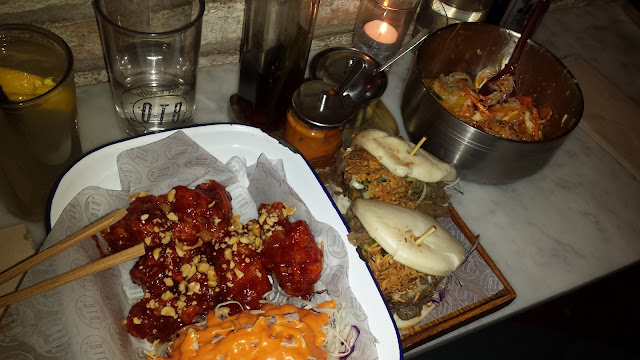 I cannot recommend the 'On the Buns' enough, which are Korean-style burgers, fill to the brim with goodness (you can choose between chicken, pork or beef; we went for the latter), and on delicious steamed bread with vegetable fritters to give the concoction extra texture (and nutritional value).

Practically everybody in On the Bab had a 'Yangyum chicken' on their table, which was, no hyperbole, the best fried chicken I've ever had. Admittedly, my bar is quite low (I would happily feast on KFC every day for the rest of my life), but this was cooked so meticulously, drenched in some of the most moreish sauce I've ever sated, that I simply had to order another portion. The crushed peanuts worked a treat in this dish as well - it's not usually an ingredient I have much time for, but, applied sparingly to the fried chicken, it managed to bring out the flavour of it more.

No Korean meal is complete without a Bibimbab, and the succulent conflation of flavours (pictured in closer detail in the Snapchat picture at the top of this entry) was a flavourful party in my mouth, to which all my favourite foods was invited. And best of all, the items we ordered didn't feel like disparate entities. You could have a bit of this and then a bit of something else, and it all tasted fantastic.

My only slight criticism of this place was that we were sat on a side-stool rather than a table, and thus, there really wasn't enough space to place all the food we'd ordered, the cocktails, our cutlery and our plates. But I'll allow On the Bab his shortcoming and not let it detract from their Perfect A grade, because, in terms of dining experiences in London, this is one of the best places I've had the good fortune of visiting.

Get daily suggestions and guides for making $1,000s per day ONLINE for FREE.
GET FREE ACCESS TODAY