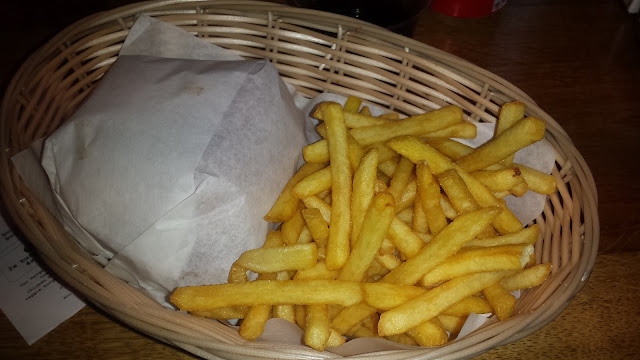 Oh dear Lord. I just have to alert the world to one of the worst burger joints I've ever had the misfortune of visiting.

The second I walked into Tommi's Burger Joint, I knew something was amiss. The floors and tables looked dirty. The sales staff there barely acknowledged me, and those who did, on seeing I was alone, didn't give me the usual polite waiter smile, as they probably thought they wouldn't swindle that much out of me.

I, however do think they swindled a fair bit out of me. I had the chicken burger, which, priced at £8.90, was certainly not cheap, particularly as you can get something much more delicious at McDonalds for a quarter of the price.

It was one of the most vile, rancid, burgers I've ever had in my entire life. There was a thick slab of chicken in the burger, but on one bite, I saw it was pink inside. Pink!!! It was textbook undercooked, flavourless meat that someone trying to cook for the first time whips up.

The other fillings in the burger were also absolutely horrendous. The onions (one of my favourite ingredients and thus, quite hard to get wrong) that accompanied the meat were uncooked. Who puts uncooked onions into a burger!? The tomatoes were unevenly distributed and soggy, leading me to believe I had the bastard leftovers.

Also, there was guacamole in the filling. Now, I don't know what kind of weird hipsters dine here, but what's wrong with, gee, I don't know, traditional sauces, such as BBQ or tomato ketchup? BBQ sauce would at least have given the burger some flavour.

I love burgers, and am generally quite easily pleased (I could gladly dine at Burger King for the rest of my life). But I wouldn't wish a trip to Tommi's Burger Joint on my worst enemy. The service was bad, the food was atrocious, and it was overpriced for what it was. Nah, mate.

Anyone here is interested in getting a FREE BURGER KING GIFTCARD?